An environment group (or env group for short) is a set of environment variables that are meant to be reused across multiple applications. For example, if all web services require a shared set of API and database keys, this could form a web-service environment group with all of those keys as a shared configuration. In this guide, we will explain how to create and use environment groups.

Environment groups are stored in your own cluster as a Kubernetes Config Map or a Kubernetes Secret. The data will be visible to any users or services with access to your cluster, such as Porter.

You can create a new environment group in the "Env Groups" tab on the dashboard. Click on "Create Env Group" from this tab: 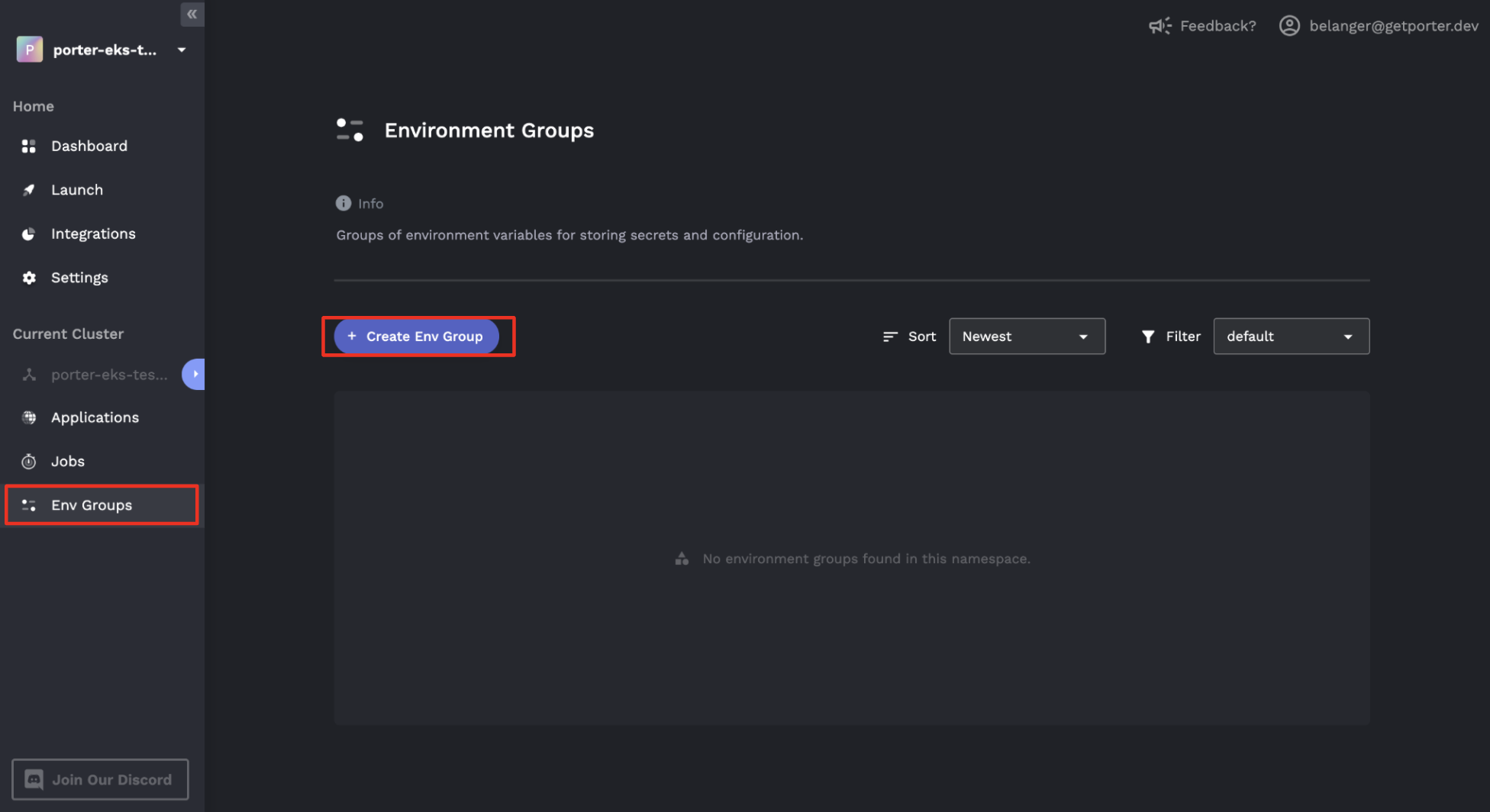 From this screen, you can name your env group and add your environment variables. In this example, we will simply create an environment group named web that will be shared across all web services that we create. When you're finished, press "Create env group". 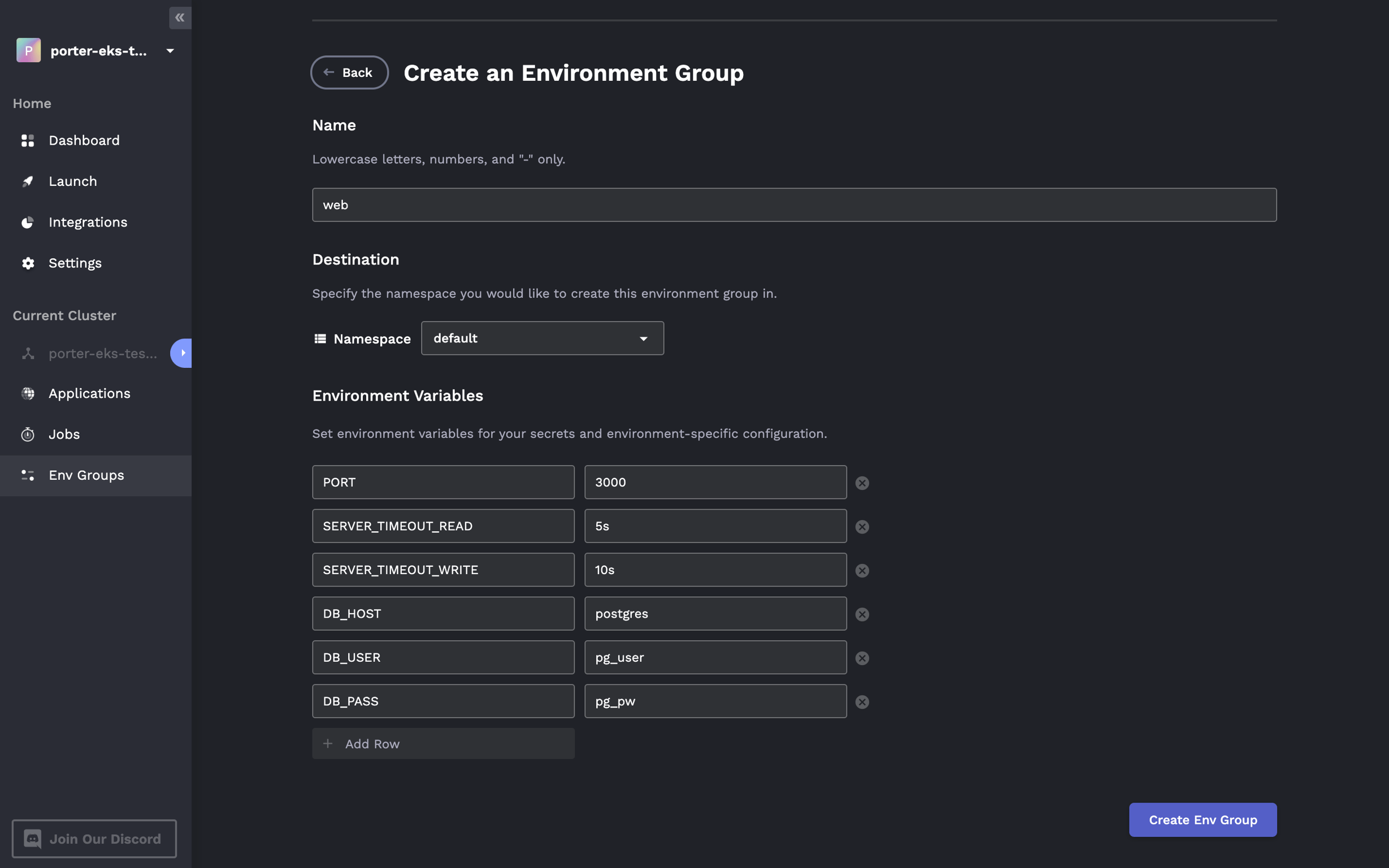 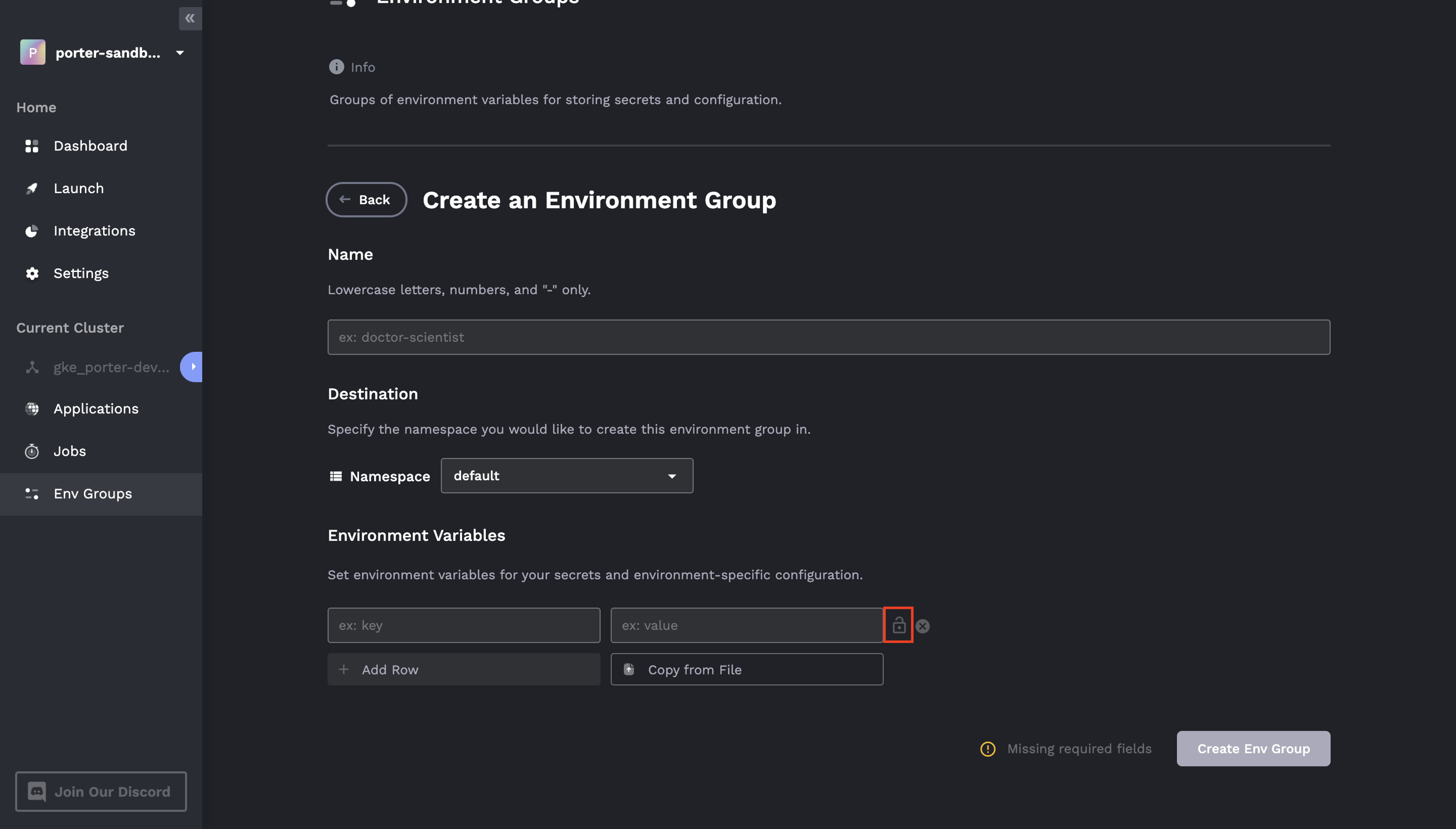 When you launch a new service, and you select "Load from Env Group" in the "Environment" tab, this sensitive value will be injected into the container before it is mounted:

Note: the sensitive value above is not written to the dashboard -- the hidden value is simply a dummy string. 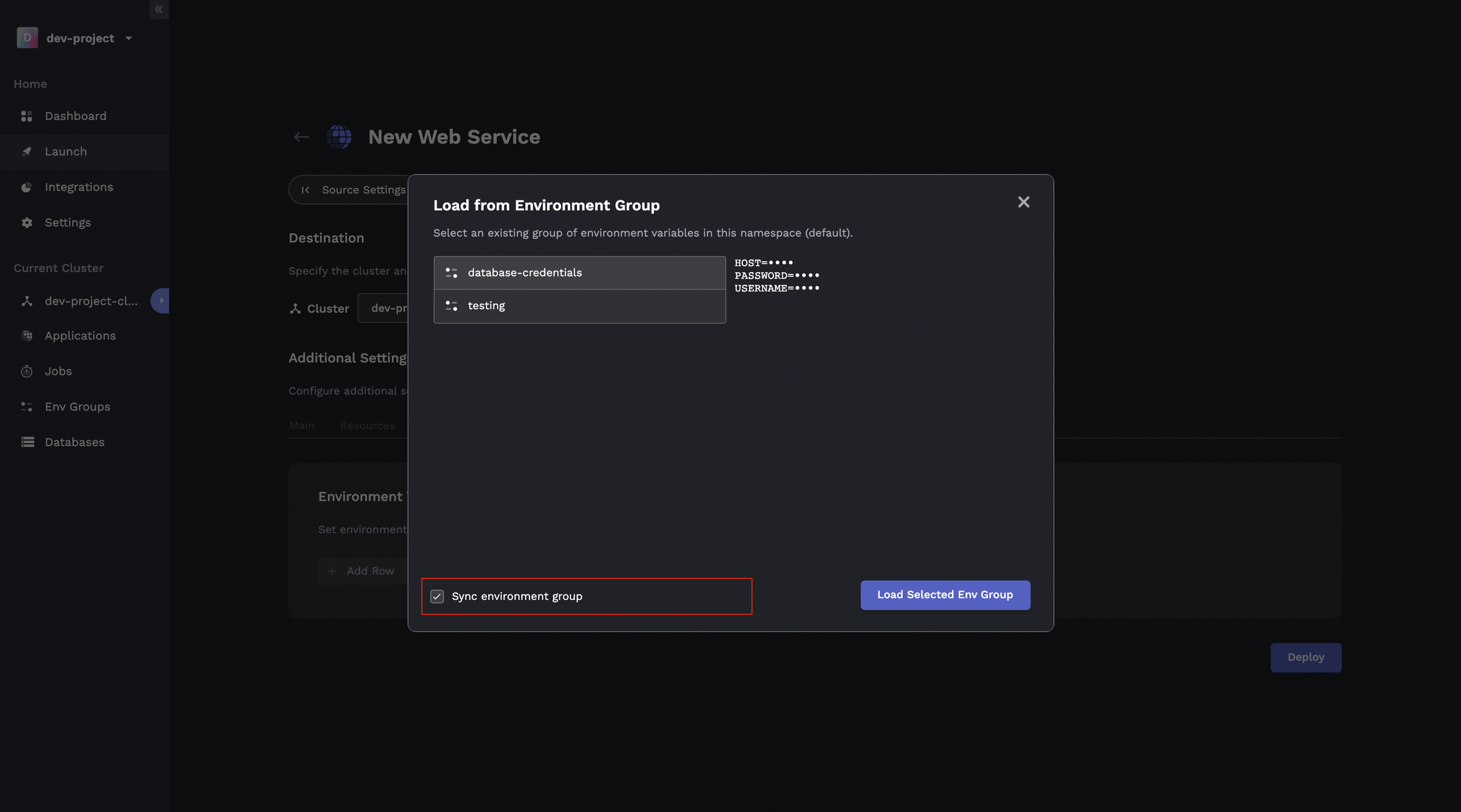 When you subsequently update those env group variables from the Env groups tab, the applications will be restarted with the new variables. 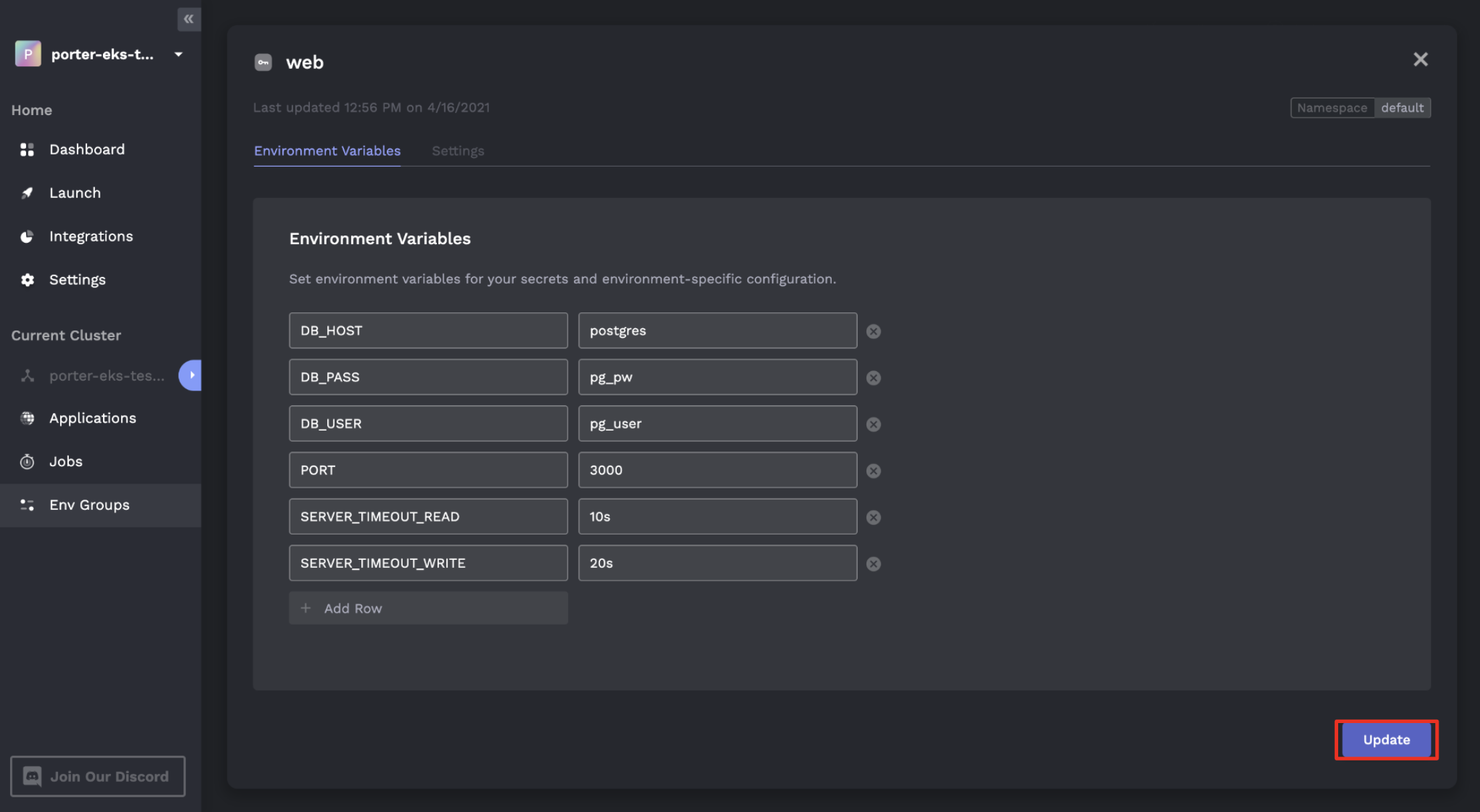 To delete the environment group, navigate to the "Settings" tab, and press the "Delete" button: 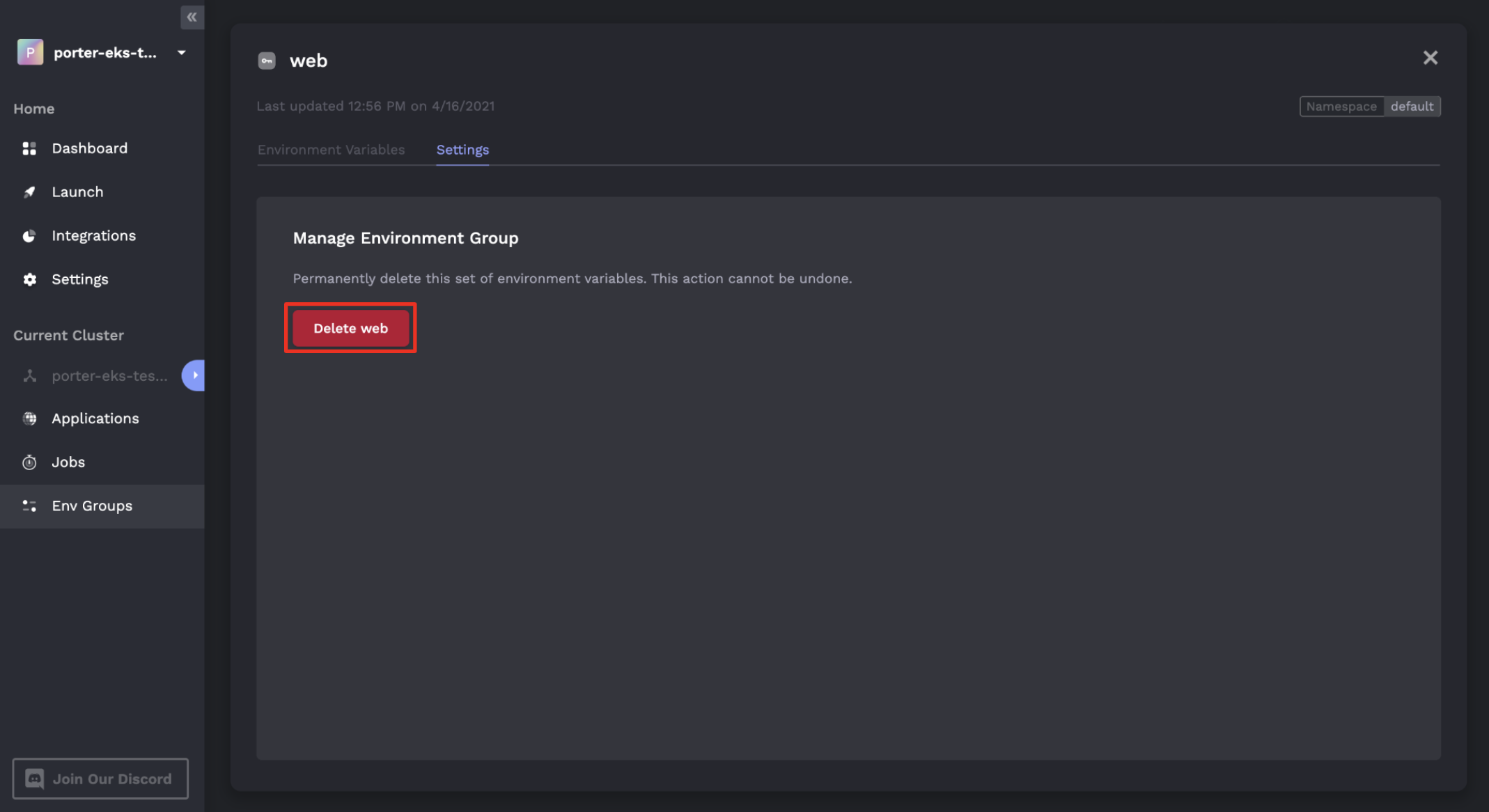 How Secrets are Stored​

All env group variables are stored in your own cluster, and not on Porter's infrastructure. The entire env group is stored as a Kubernetes Config Map, which is meant for non-sensitive, unstructured data. When you create a secret environment variable, the ConfigMap will contain a reference to a Kubernetes Secret, which contains the secret data. This secret will be injected into your container as it is mounted, and will not be exposed on the Porter dashboard after creation. To summarize:

There is no further encryption beyond what is offered by the managed Kubernetes providers. Some providers will encrypt all secret data in the control plane at rest (in etcd), others will store it as base64-encoded data. While you don't have access to this control plane or the etcd instance, users with access to your cluster could view the secrets using kubectl get secrets -o yaml, for example.

For secret encryption beyond what is offered in the managed Kubernetes providers, you may want to use a solution such as sealed-secrets.